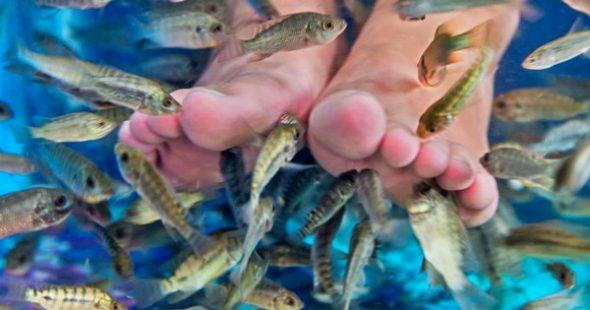 There are reports of infection following fish pedicure. However, careful attention to details is important when trying to assessing risk for the general population.

Take the story of Victoria Curthoys. The toes of her right foot were amputated in Australia over the course of five years after she went for a fish pedicure in Thailand. One detail that was omitted in some accounts was found in her Instragram account.  She was “born with no feeling in my foot” and may not be aware of subtle injury from any cause.

A report from ABC News reported a “bacterial outbreak among 6,000 Garra rufa fish imported from Indonesia to British salons and pedicure spas”. However, an important point was omitted. Most of the fish were dead.

Another complication reported was toenails falling off, but could not be proven that it was due to the fish pedicure.

In contrast to most people who go for fish pedicures sporadically to exfoliate skin, ichthyotherapy (the formal name of fish pedicures) requires more frequent use for alleviation of psoriasis.

The CDC (Centers for Disease Control and Prevention) states that each state has the authority to ban fish pedicures. Possible reasons include:
•  The fish pedicure tubs cannot be sufficiently cleaned between customers when the fish are present.
•  The fish themselves cannot be disinfected or sanitized between customers.
•  Chinese Chinchin, another species of fish that is often mislabeled as Garra rufa, grows teeth and can draw blood, increasing the risk of infection.
•  Garra rufa could pose a threat to native plant and animal life if released into the wild.
•  The fish must be starved to eat skin, which might be considered animal cruelty.

Fish pedicures are illegal in licensed salons in Nevada. However, the website for SeaQuest Las Vegas promotes their “relaxing spa..while Doctor Fish gently exfoliates your feet.” The word “pedicure” in not mentioned. PETA has requested an investigation.